We've seen a lot of faces pass through the technology, customers, teams, panels, communities, families - you name it. You learn a lot about human behaviour - and here are a few of the more interesting findings!

The longest video response to a single question comes in at 10 minutes, submitted from a passionate mother talking about her children.

At an average speech rate of 140 words per minute (WPM), the average video response contains 100 words, about as many as these tbree paragraphs. In comparison, the average typing speed is 40 wpm - 70% slower than video when answering open questions.

Unfortunately for husbandly complaints around the world, we've found that on average, men and women use the same number of words when responding to a question on smartphone video.

If anything we found that the average words spoken by men tipped our female respondents by 1%.


3. …but they are twice as likely to answer

Across non gender bias Verbate surveys, we found that 66% of respondents are female, and just 34% male.

While we understand that other unknown factors may contribute to this skew, these results align with similar studies such as the number of selfies conducted by women vs men on Instagram. I think we can safely say that women are more comfortable talking on camera.

Excluding specific location based tasks - responses are recorded at home, work, outdoors & whilst in transit. The "other" section includes responses from shops, schools, gyms, bars etc.

Consumer surveys see the majority of responses recorded at home, however almost half take part away from the (indoor) home.

Internal & corporate surveys see a much heavier bias of responses in the workplace, however 30% still find their way outside the walls

A few things we notice with response locations:

Consider the impact of location on the responses you'll receive and cater your time of invite and messaging to best exploit this.

Video tasks are an incredibly powerful way to understand how your customers use & interact with your brand / product, a core "video only" ability use we feel is being underutilised.

Whether it be asking a consumer to show you around their home, use your (or a competitor's) product, take you shopping or share their journey to work on public transport - seeing these performed from your respondents point of video will unveil insight you've never imagined.


6. Response times drop from 31 hours to 27 minutes with SMS

When we look at all SMS invite completes performed on Verbate, the median time in which someone will respond is 27 minutes. The average response time is 12 hours. 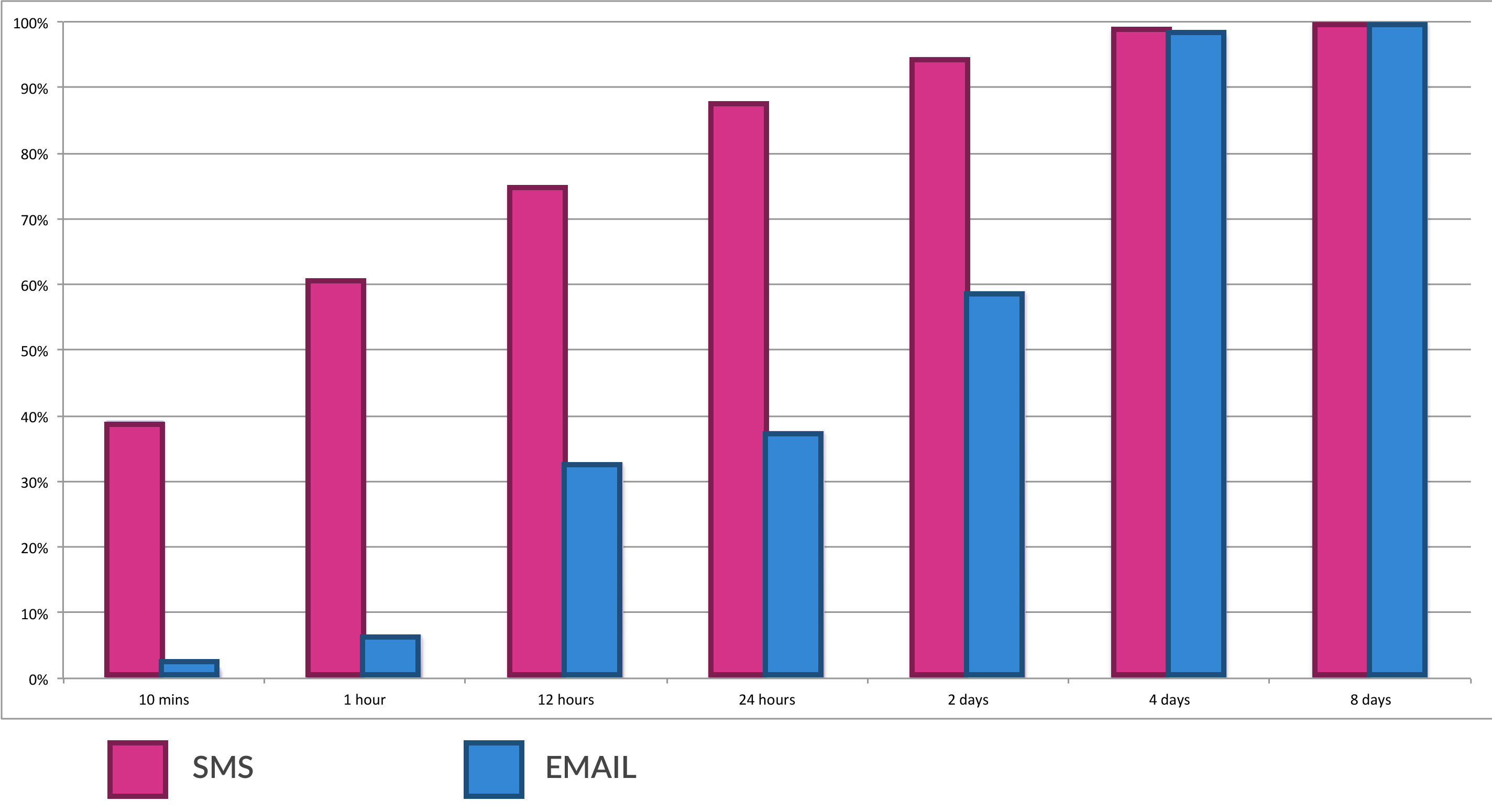 N.B. Only use SMS if respondents have opted in.

7. Response rates double with use of reminders & deadlines

Online eyewear company Sneaking Duck ran a recent Verbate survey to help them understand who their users all over the country really were. Invites would be sent to a selection of their opted in mailing list, in return for a significant Sneaking Duck gift voucher.

The first survey was sent out with no deadline for survey completion. Two reminders followed to non-completes, the last reminder included a deadline. Reminders led to 400% more responses.

A second survey was also sent out, but this time a 3 day deadline was given in the initial communication. The initial completion was much higher, even so reminders were used to effectively double completion rates.

In addition, the total number of responses for the second survey was 15% higher with a deadline. You can further improve response rates by ensuring that any opt in gives the survey link asap.

Don't dive straight into the hardest question with a new video respondent - let them warm up to the camera. Start with an introductory question, ask about their passion, get them to demonstrate something, or best of all ask something fun.

Once a first video is done, you will see respondents start to relax, and results only get better - more focused, more natural with time. Come time for survey 2 and 3 we forget talking to camera was ever a concern.

We gather a lot of feedback from survey respondents, both those that do, and don't complete surveys so that we can better understand and address concerns.

Above shows feedback from completes and incompleted surveys - even those that do complete a survey can show some reservations if not set up correctly. To address concerns: